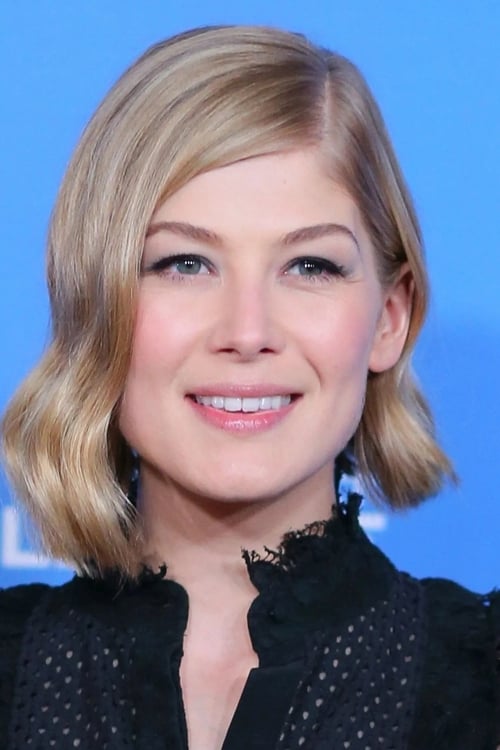 Rosamund Mary Ellen Pike (born January–February 1979) is a British actress. She has received various accolades, including a Golden Globe Award and a Primetime Emmy Award, in addition to nominations for an Academy Award and a British Academy Film Award.

Pike began her acting career by appearing in stage productions such as Romeo and Juliet, alongside Paul Ready, and Gas Light. After her screen debut in the television film A Rather English Marriage (1998) and television roles in Wives and Daughters (1999) and Love in a Cold Climate (2001), she received international recognition for her film debut as Bond girl Miranda Frost in Die Another Day (2002), for which she received the Empire Award for Best Newcomer. Following her breakthrough, she won the BIFA Award for Best Supporting Actress for The Libertine (2004) and portrayed Jane Bennet in Pride & Prejudice (2005).

Pike had film appearances in the sci-fi film Doom (2005), the crime-mystery thriller film Fracture (2007), the drama film Fugitive Pieces (2007), the coming-of-age drama An Education (2009), for which she was nominated for the London Film Critics' Circle Award for British Supporting Actress of the Year, and sci-fi comedy The World's End (2013). She also received British Independent Film Award nominations for An Education and Made in Dagenham (2010), and was nominated for a Genie Award for Barney's Version (2010). Her other films include the spy action comedy Johnny English Reborn (2011), the epic action-adventure fantasy Wrath of the Titans (2012), and the action thriller Jack Reacher (2012).

In 2014, her performance in the psychological thriller Gone Girl was met with widespread critical acclaim, winning the Saturn Award for Best Actress and receiving a nomination for the Academy Award for Best Actress. Pike received further acclaim for her starring role as Ruth Williams Khama in the biographical drama A United Kingdom (2016) and for portraying the journalist Marie Colvin in the biographical war drama A Private War (2018), for which she was nominated for the Golden Globe Award for Best Actress in a Motion Picture – Drama. Pike won a Primetime Emmy Award for her role in State of the Union in 2019. She won a Golden Globe Award for her performance in I Care a Lot (2020). She has also starred in the Amazon Original series The Wheel of Time (2021–present).

Although gentle, and preferring to be out of the limelight, the INFJ personality type will work long and hard behind the scenes to maintain harmony but they are also intensely independent, of both of thought and spirit, and will be outspoken in their defence of human values, the downtrodden, and the oppressed. Earnest and responsible INFJs often see themselves on a mission, and they take their missions very seriously. The views of the INFJ are very personal, built up over a long time and so anything which may be perceived as questioning their values may be dealt with in an unusually direct way, surprising those who saw only the quiet INFJ.

The INFJ is the rarest of Jungian types and as such is in many ways the most enigmatic, difficult to know and difficult to understand. So, people can often read the INFJ wrongly. Serious minded and caring, values are just so important to the INFJ whose word is not just a bond but tied in with who they are intrinsically as people. Integrity is the watchword and they will be excellent listeners, patient, supportive and with a strong desire to ‘do the right thing.’ Their perceptiveness means that others will ‘open up’ and they are often the catalyst for making things better. Although quite gentle and preferring to be out of the limelight, the INFJ will work long and hard behind the scenes to maintain harmony. But they are also intensely independent - both of thought and spirit - and will be outspoken in their defence of human values. An INFJ's values have been honed over some time, deep within their own heads, and they may not be happy to share these. This can make it difficult to get close and may mean that other people see them as a bit strange or quirky. The INFJ would not see the need to alter this view and will generally work quietly until a value is contravened. The problem is that INFJs are so complex, individualistic and un-forthcoming, that the other person may not realise that some value or deeply held belief has been transgressed and be quite surprised how sharply the INFJ can react and how outspoken, assertive and stubborn they can suddenly and uncharacteristically become. This is because the INFJ is sensitive, in both directions, outwardly to the needs of others and inwardly.

An INFJ's values have been honed over some time, deep within their own heads, and they may not be happy to share these.

The INFJ may be so committed to the cause that other issues take a poor second place. The introvert side means that so much internal processing and reflection goes on but once the course of action has been agreed others, who perhaps perceived a quiet inactive individual, may be surprised by just how decisive, energetic and single-minded the INFJ is. The responsible, serious nature of the INFJ means that they may have to learn to ‘lighten up’ as devotion can take its toll in missing out on the more fun and less intense moments life occasionally throws up. INFJs can make inspiring leaders, (as followers will believe in them and want to ‘sign up’) and have a devotion to the cause that borders on evangelical and certainly those following will have a crystal-clear vision of how it could be.

Like the INTJ, the INFJ has the ability to understand complex processes and systems but the INFJ will use these primarily to understand people, and make things happen for them. Even though they are likely to project to others as quite shy, and certainly quiet, INFJs have a keen interest in others and will work hard and behind-the-scenes to achieve their goals. Never over-exuberant or gushing, trust would take quite some time to build with INFJs, as they do not readily share their emotions with other people. The INFJ likes complexity and theorising, providing the subject-matter is not about them. They value respect, both for themselves and for others, and will only be really forthcoming when hurt or when talking through some complex issue. Those who are campaigners, (many INFJs adopt such roles), are there because they believe in the cause, rather than for personal glory or political power. Astute readers of people, they are naturally suspicious about others' motives. They are friendly and sympathetic, but highly selective about their friends, as to them friendship is something not to be taken lightly so getting emotionally close to an INFJ would take some time - if ever. INFJs are an unusual combination of idealist and go-getter, and so they will have strongly thought through views, and a desire and ability to make it happen.

The Wheel of Time

I Care a Lot

Archibald's Next Big Thing Is Here

The Windsors: Inside the Royal Dynasty

State of the Union

The Man with the Iron Heart

What We Did on Our Holiday

How does Rosamund Pike's personality compare to other Celebrities?