Duty, consistency, service - and gluing it all together

HM the Queen has been on the throne for 70 years when, at aged 25 after her father’s death, she picked up the mantle and was crowned the following year, 1953. If her uncle, Edward the 8th had not abdicated in 1936 when she was 10, her life would have taken a very different turn, but at 25, a shy, serious young lady, she was thrust into the world as the Queen. That is such a long time to be in the public eye especially so in the midst of an incredibly fast-changing world. Being the stalwart in something as traditional as the royal family yet recognising the world is changing and ensuring they maintained both tradition and relevance in modern times could not have been easy. So, how did Her Majesty, generally agreed to be an ISTJ, manage to do that?

The first point to make is that an ISTJ is generally assumed to be duty-driven and consistent, which is essential as head of the royal family, maintaining standards of conduct, always projecting in the right way, and not making too many mistakes. As her family have grown and expanded, she has had to deal with many issues, from the public divorce of Charles and Diana, the awkward revelations both made on TV, death of Diana, where she was criticised for not being ‘present,’ when she was actually looking after her grandsons, through to the estrangement of Harry after his marriage to Meghan. What she has done, is shown a consistency of spirit and decorum, and not allowed herself, or the family brand, to be damaged or tainted, but whilst maintaining an olive branch to those who have moved slightly out of the circle. Being an ISTJ, driven by duty, tradition and family must be difficult when the family is clearly made up of a disparate bunch of personalities, each driven by different values and having to keep them all in line and the family name untarnished. We can see in a YouGov poll in early 2022 where in terms of fame, (having heard of her) she polled 97%, and popularity (being liked by) she polled 75%, this in a country where there are still many ‘abolish the monarchy’ movements. We can see by looking at the poll, also how relatively popular she is compared to the rest of her family:

Even if we cut the data by age group or gender, the Queen still tops the poll, an incredible achievement, especially so after 70 years’ service. And if we look at the Royal Family Personality Team Map, we can see what a spread of personalities there is, and it is to her credit that she has navigated this, held it all together, and is still so popular. Let’s look at the Royal Family Team Map:

A huge range of personality types, all in one royal family, some similarities, but many differences, which of course is a good thing, but also as head of the royal family, tricky to hold it together. Understanding, dealing with, motivating and getting the best out of an ISFJ is very different, well in fact the opposite, to how you would approach an ENFP. This illustrates how well Her Majesty has been in holding it all together, working through the differences and managing them.

So, for that and for so many other reasons and contributions we say congratulations to Her Majesty on her Platinum Jubilee and 70 years of leadership, diplomacy, dedication, service and grace, on occasions against all the odds.

What about your family, your gang, or your team? How would they span out on your personality team map? Fascinated? You can find out right here, and remember, it is, of course, free: 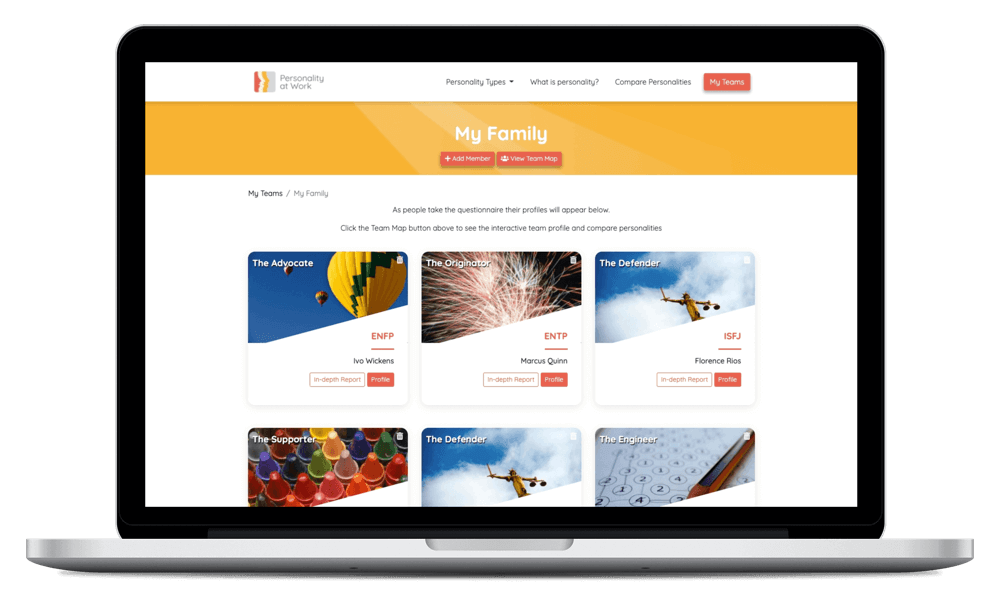 Posted 4 weeks ago by Lee