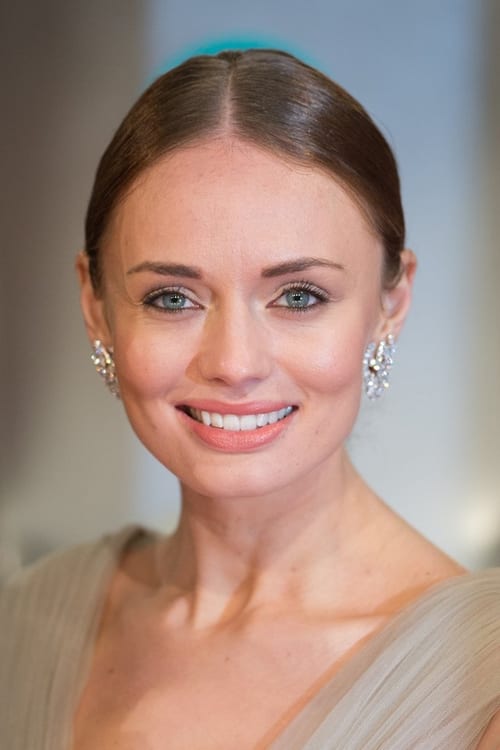 Laura Haddock is an actress.

From Wikipedia, the free encyclopedia.

Born in Enfield, London and raised in Harpenden, Hertfordshire (where she attended St. George's School), Haddock left school at the age of 17 and moved to London to study drama. She trained at Arts Educational School in Chiswick. Haddock made her television debut in the television pilot Plus One, part of the Comedy Showcase 2008. Her other television credits include The Palace, My Family, The Colour of Magic, Marple: A Pocket Full of Rye and Honest, playing the lead role of Kacie Carter. She also appeared in the pilot episode of Life Is Wild, the American version of Wild at Heart. She also starred in adverts for dot tel. Haddock played the lead role of Natasha in the ITV1 comedy dramaMonday Monday, and appears in series two and three of How Not to Live Your Life, replacing previous female leadSinéad Moynihan. In 2011, she appeared in the Cinemax/Sky TV drama Strike Back: Project Dawn for two episodes playing the kidnapped daughter of an illegal arms dealer. She stars as Lucrezia Donati, the mistress of Lorenzo de' Medici and lover ofLeonardo da Vinci in the 2013 series Da Vinci's Demons. Haddock's theatre credits include Famous Last, which formed as part of the 2009 Sky Arts Theatre Live! project, and Rutherford & Son at Northern Stage.

ISFJ personality types are the people-centric doers, using their considerable organisational ability to make sure people are taken care of and protected. They are extremely conscientious, hardworking, loyal and dedicated, to people, organisations, groups. Once they are allied to the cause they take their roles very seriously. They have incredibly clear and precise memories and are scarily accurate with facts, figures, names, faces - oh and any person who has slighted them! The ISFJ gathers facts and data and are painstakingly accurate with incredible attention to detail, and extremely methodical in their approach.

It may be possible to overlook the value of an ISFJ as they are the behind-the-scenes 'glue' for organisations and groups. Unlike the ESFJ who will be more outspoken, the ISFJ will work steadily and quietly to ensure all the routine details are taken care of, and that people are happy. Rarely will they share their own values, preferring to keep their own counsel and make their focus the needs of others. It would be a mistake to underestimate the ISFJ as, although they may give very little out in terms of articulating their feelings, their 'S' detailed type memory stores everything of relevance, they will quietly know everything that is going on and has gone on. Because they don't necessarily share their feelings this does not mean they don't have any. It is easy to transgress the values of an ISFJ without ever knowing you have done it. Their values are so intrinsic to them, such a part of who they are, and they therefore share them with very few people. In the team the ISFJ will be the quiet one getting things done, almost invisible at times, but the strong glue holding the team together.

Loyal, shy, devoted to the cause, the ISFJ has an intense need to belong and will work tirelessly for the cause and will channel their considerable energies into their work, or indeed anything which has been asked of them. They have incredibly clear and precise memories and are scarily accurate with facts, figures, names and faces. Detailed and methodical, everything is stored up, in perfect order, in pristine grey filing cabinets in their heads, and may come out later in a tirade of facts and evidence dating back a very long way.

The ISFJ is the quiet, gentle individual yet a behind-the-scenes mover and shaker who will not seek the glory, indeed would prefer to remain understated, needing only stroking from those they trust and value.

Although generally shy and reserved, the ISFJ takes work, indeed anything they do, seriously and much prefer it when others do the same. They are caring, sympathetic and want to help, but do not need the kudos, indeed they may be suspicious of those who try to bestow compliments on them especially in the early stages of a relationship. The ISFJ exists only in the present (and the past!) and will use actual, real concrete past experiences to deal with present problems. This means they may struggle with concepts or trying to imagine a future indeed the future may appear scary as it is full of the unknown and the ISFJ prefers the known. This means that change and the new and untried can worry the ISFJ as they fear looking foolish and being ‘in the spotlight.’ The ISFJ loves to be appreciated but does not like constant scrutiny, expecting others to let them get on with it. Although private and shy ISFJs are often sociable and characterised above all by their desire to support others, the ‘need to be needed.’ In extreme cases, this need is so strong that standard give-and-take relationships can be deeply unsatisfying to them, however most ISFJs find more than enough with which to occupy themselves within the framework of a normal life. Since ISFJs, like all SJs, are very much bound by the prevailing social conventions, their form of ‘service’ is likely to exclude any elements of moral or political controversy; they specialise in the local, the personal, the obvious and the practical all in the here and now.

Although private and shy ISFJs are often sociable and characterised above all by their desire to support others, the ‘need to be needed.’ Conservative and dutiful, ISFJs like rules, protocols and conventions so that have clear groundrules within which to work. They would not like to wing it and like to be in possession of all the facts before they proceed as they have an underlying fear of getting it wrong. This means they will check and check again and so it is rare that an ISFJ will actually get it wrong, so worried are they about that happening.

Being SJs, they place a strong emphasis on conventional behaviour (although, unlike STJs), they are usually as concerned with being friendly, kind and sympathetic.

Guardians of the Galaxy Vol. 2

Guardians of the Galaxy

Dancing on the Edge

Rage of the Yeti

How does Laura Haddock's personality compare to other Celebrities?