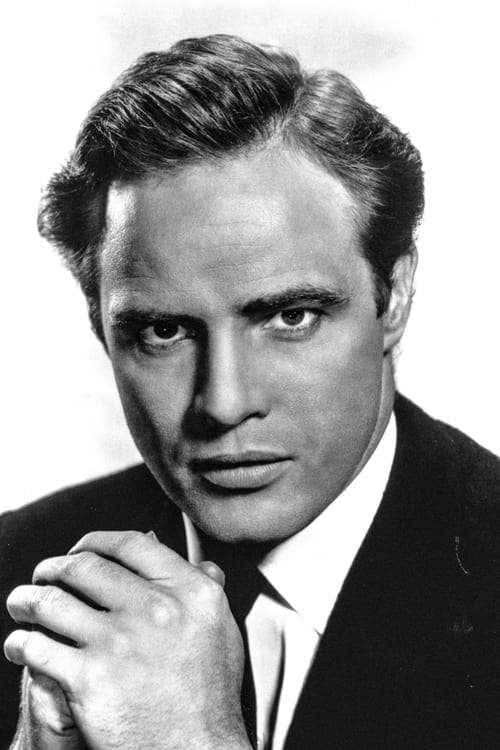 Marlon Brando Jr. (April 3, 1924 – July 1, 2004) was an American actor. Considered one of the most influential actors of the 20th century, he received numerous accolades throughout his career which spanned six decades, including two Academy Awards, two Golden Globe Awards, and three British Academy Film Awards. Brando was also an activist for many causes, notably the civil rights movement and various Native American movements. Having studied with Stella Adler in the 1940s, he is credited with being one of the first actors to bring the Stanislavski system of acting and method acting, derived from the Stanislavski system, to mainstream audiences.

He initially gained acclaim and his first Academy Award nomination for Best Actor in a Leading Role for reprising the role of Stanley Kowalski in the 1951 film adaptation of Tennessee Williams' play A Streetcar Named Desire, a role that he originated successfully on Broadway. He received further praise, and a first Academy Award and Golden Globe Award, for his performance as Terry Malloy in On the Waterfront, and his portrayal of the rebellious motorcycle gang leader Johnny Strabler in The Wild One proved to be a lasting image in popular culture. Brando received Academy Award nominations for playing Emiliano Zapata in Viva Zapata! (1952); Mark Antony in Joseph L. Mankiewicz's 1953 film adaptation of Shakespeare's Julius Caesar; and Air Force Major Lloyd Gruver in Sayonara (1957), an adaptation of James A. Michener's 1954 novel.

The 1960s saw Brando's career take a commercial and critical downturn. He directed and starred in the cult western One-Eyed Jacks, a critical and commercial flop, after which he delivered a series of notable box-office failures, beginning with Mutiny on the Bounty (1962). After ten years of underachieving, he agreed to do a screen test as Vito Corleone in Francis Ford Coppola's The Godfather (1972). He got the part and subsequently won his second Academy Award and Golden Globe Award in a performance critics consider among his greatest. He declined the Academy Award due to alleged mistreatment and misportrayal of Native Americans by Hollywood. The Godfather was one of the most commercially successful films of all time, and alongside his Oscar-nominated performance in Last Tango in Paris (1972), Brando reestablished himself in the ranks of top box-office stars.

After a hiatus in the early 1970s, Brando was generally content with being a highly paid character actor in supporting roles, such as Jor-El in Superman (1978), as Colonel Kurtz in Apocalypse Now (1979), and Adam Steiffel in The Formula (1980), before taking a nine-year break from film. According to the Guinness Book of World Records, Brando was paid a record $3.7 million ($16 million in inflation-adjusted dollars) and 11.75% of the gross profits for 13 days' work on Superman.

Brando was ranked by the American Film Institute as the fourth-greatest movie star among male movie stars whose screen debuts occurred in or before 1950. He was one of only six actors named in 1999 by Time magazine in its list of the 100 Most Important People of the Century. In this list, Time also designated Brando as the "Actor of the Century".

To the INFP personality types life is a long quest for meaning and harmony and their personal values are so important to them. This means that it is essential to the INFP that their beliefs and their actions are totally in sync at all times. An INFP is unlikely to take any action which they don’t believe in their heart is right. Yet there is a crusading side to the INFP which would surprise even those who knew the person well. When a personal value, or belief is trodden on, then the INFP can become outspoken and turn on the transgressor. They are so private that their values are usually well hidden so that other people may not realise, but the INFP becomes like a champion of the cause and will be expressive, animated and at times go for the jugular.

The INFP has two contrary characteristics, curiosity and shyness. They love to know what's going on, feel excluded if not kept informed but prefer to be more in the background and not wanting to be the centre of attention. The INFP always wants to be invited to the party - even though the chances are they won't show up. There is a sensitive, caring side to the INFP which means they will be see the interconnections between people and pick up on the verbal and non-verbal cues.

Sensitive, caring and empathetic INFPs are excellent in supporting roles where people have to be looked after - especially if those people are close to the INFP. Because it can take so long (if ever) to get to know the INFP, others paradoxically may see them as slightly aloof, as they engage best when they have allowed someone into their inner sanctum. Optimistic and extremely positive, INFPs are the ultimate dreamers. Forward thinking and focused, they love the possibilities that life might bring.

An INFP does not like to be categorised. They value their autonomy, and feel 'different,' and any system, (including this one), which tries to 'define' or 'explain' them would be denigrated. The INFP would say, 'You can't put me in a box, I'm different,' indeed they would all say this. Optimistic and extremely positive, INFPs are the ultimate dreamers. Forward thinking and focused, they love the possibilities that life might bring. INFPs are extremely future oriented individuals who enjoy flights of fancy and savour potential and the many possibilities unlike their ISFP counterparts, who prefer to stop and savour the sensory, real experiences of “this moment” to the maximum. The ISFP will look down, immersing themselves in actual experiences whilst the INFP will always look up and forward, dreaming big dreams and loving the anticipation of what might come.

Optimistic and extremely positive, INFPs are the ultimate dreamers. Forward thinking and focused, they love the possibilities that life might bring.

INFPs have the ability to see good in almost anyone or anything. Even for the most unlovable individual the INFP can have (often misplaced) empathy and even pity. Their extreme depth of feeling is often hidden, even from themselves, until circumstances see them project a seemingly uncharacteristic impassioned, and extraverted, response. Of course, life is not always harmonious, so INFPs are not immune from all of life’s problems, frustrations and disappointments that we all face.

However, they feel a duty to a higher calling, the greater good. So, although essentially idealists and extremely gentle individuals, INFPs, when their values are contravened, can adopt a more strident, crusading ESTJ type of role, to sort things out, which will surprise even close friends who have only seen the gentle, quiet soul. But then, once they’ve made their point, their energies will be depleted, and they will disappear back to their own, quiet, introverted world of possibilities and harmony, often questioning whether they should have been so harsh and worried that they haven’t either shown too much of themselves (always a concern for the extremely private INFP) or, worse still, that they might have caused hurt to someone, which is never their intention.

Rita Moreno: Just a Girl Who Decided to Go for It

And the Oscar Goes To...

You Will Believe: The Cinematic Saga of Superman

Look, Up in the Sky! The Amazing Story of Superman

How does Marlon Brando's personality compare to other Celebrities?