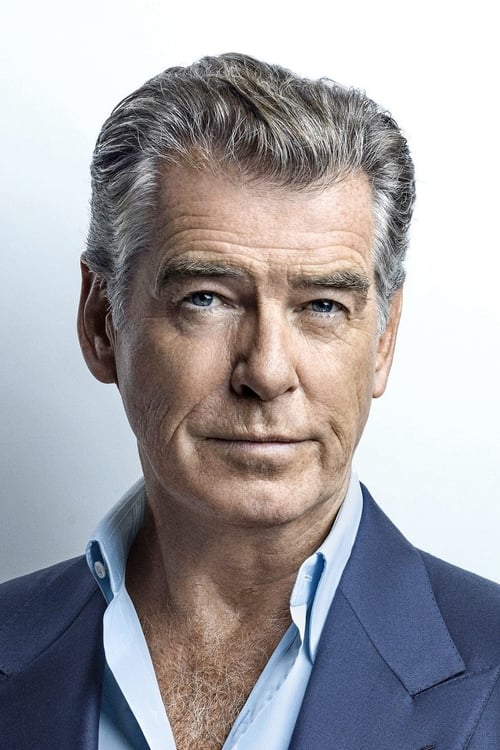 Pierce Brendan Brosnan, OBE (16 May 1953) is an Irish actor, film producer and environmentalist who holds Irish and American citizenship.

After leaving school at 16, Brosnan began training in commercial illustration, but trained at the Drama Centre in London for three years. Following a stage acting career he rose to popularity in the television series Remington Steele (1982–87). After Remington Steele, Brosnan took the lead in many films such as Dante's Peak and The Thomas Crown Affair. In 1995, he became the fifth actor to portray secret agent James Bond in the official film series, starring in four films between 1995 and 2002. He also provided his voice and likeness to Bond in the 2004 video game James Bond 007: Everything or Nothing.

Since playing Bond, he has starred in such successes as The Matador (nominated for a Golden Globe, 2005), Mamma Mia! (National Movie Award, 2008), and The Ghost Writer (2010). In 1996, along with Beau St. Clair, Brosnan formed Irish DreamTime, a Los Angeles-based production company.

In later years, he has become known for his charitable work and environmental activism. He was married to Australian actress Cassandra Harris from 1980 until her death in 1991. He married American journalist and author Keely Shaye Smith in 2001, becoming an American citizen in 2004.

Serious-minded, individualistic and thorough, the ISTJ personality types like to plan, schedule and drive through to completion, in a logical linear sequence. Any deviation from the plan would be questioned and may take some convincing of its merits. The ISTJ is essentially the engine room, the behind-the-scenes worker making it happen. Concentration, willpower and persistence epitomises the ISTJ approach to work and to life and they will begin at the beginning and end at the. Spontaneity and flexibility are less important to the ISTJ. Conservative and risk-averse ISTJs excel when it needs a steady hand and they are unlikely to ever drop the ball.

The ISTJ is the behind-the-scenes worker making things happen. Their sense of duty and loyalty means that they will rarely be happy in the front line, preferring to be in the back room making it all happen. The ISTJ is the sensible, ‘prefect-type’ character, who wants to get it right and 'do good.' Their value to the team is protection, from mistakes, from omissions, from self-delusion and from going off-track. The ISTJ loves seeing things come to fruition. Ideas, complexity and imagination are of value only if they lead to a practical end result. An ISTJ needs to be clear on what is expected, and then will plan and work with consistent and steady energy towards completion. Their opinions will be slowly arrived-at and, consequently well-thought-through, tried and tested. The ISTJ is not prone to bursts of emotion, flying by the seat of their pants nor will they thrive in a chaotic environment, unless they have the opportunity to formalise it and make it non-chaotic.

Serious-minded, individualistic and thorough, the ISTJ may focus so much on the task that they can forget the needs of others, including themselves. ISTJs like to plan, schedule and drive through to completion, in a logical linear sequence. Any deviation from the plan would be questioned and the ISTJ may take some convincing of its merits. An ISTJ can be trusted to complete, to work hard and play by the rules. However, they may not always articulate how they are feeling or even how things are progressing. The ISTJ plans the work and works the plan, so why should there be any need for up-dates. They naturally tune into the actualities and specifics of life and thus they will be reliable, loyal and work with existing, known facts and data. Conscientious, hardworking and serious about their undertakings ISTJs are built for attrition, to work tirelessly in achieving the agreed goals. The ISTJ may not have been the one to set the goals but they will make sure they are met - to the letter, working methodically, carefully and taking it very personally. Everything is taken literally (with no irony) and they pride themselves on being careful and accurate about ‘the facts.’ ISTJs are built to execute, exactly as agreed.

Quiet and thoughtful, the ISTJ work best when they are clear on what is expected and then allowed to get on with it without interruption or interference from others, preferably in a familiar way in familiar surroundings. The ISTJ does not like being thrown in at the deep-end and they have to feel that whatever they are being asked to do makes logical sense. The new, the untried worries the ISTJ as they rely instinctively on experience and prefer the known and the traditional and, as they learn best through doing so any activity with which they have no direct first-hand experience will cause a wariness and mistrust initially. Sure, the ISTJ can change but they need to see a logical reason for doing so, and they’ll need to think it through. Anything perceived as woolly will not compute. Conservative, risk-averse and methodical ISTJs come into their own when it needs a steady hand and abject attention to detail. And they are unlikely to ever drop the ball. The ISTJ will not be prone to say: ‘let’s give it a whirl.’

Logical, detached and detailed, ISTJs pride themselves on their store of data and knowledge, all arrived at with clinical procedure and experience. They take great care not to get it wrong and like everyone to take responsibility for their actions - and their mistakes

Others may see them as slightly cold and impersonal, possibly even uncaring. However, their decisions are based on what makes the most logical sense and as such this can mean the feelings of others may not necessarily be factored into this process. The ISTJ will then systematically carry out the task diligently and to the letter, which can make them appear inflexible, but this is simply a sign of the seriousness with which they embrace responsibility.

ISTJs will begin at the beginning and end at the end, no deviations. They have a keen sense of what’s right and wrong, are known for dedication to duty, and so doing things right, being punctual, doing what they say they’ll do, are the values they live by.

Jack B. Yeats: The Man who Painted Ireland

The Pig on the Hill

The Only Living Boy in New York

Judi Dench: All the World's Her Stage

How does Pierce Brosnan's personality compare to other Celebrities?