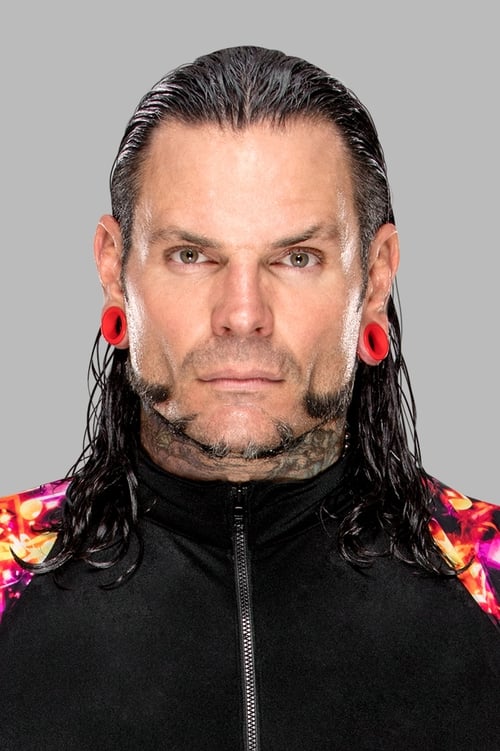 American professional wrestler, singer-songwriter, painter, and musician. He is currently signed to WWE, where he performs on the SmackDown brand, and he is one half of the SmackDown Tag Team Champions with his brother Matt Hardy.

Hardy is best known for his work in the World Wrestling Entertainment. He also worked for Total Nonstop Action Wrestling (TNA), Ring of Honor (ROH) and several companies on the independent circuit. Before gaining prominence in the WWE, Jeff along with his real life brother Matt, ran and performed for the Organization of Modern Extreme Grappling Arts (OMEGA). The Hardy brothers worked as enhancement talents for the WWF from 1994, and were signed to full-time contracts in 1998. They gained notoriety in the tag team division, partly due to their participation in Tables, Ladders and Chairs matches. With the addition of Lita, the team became known as "Team Xtreme" and continued to rise in popularity. Alongside Matt, Jeff has held twelve world tag team championships between WWE, TNA and ROH.

Hardy is involved in motocross, music, painting and other artistic endeavors. He is currently a member of the band PeroxWhy?Gen, with whom he has released three studio albums and three extended plays. On September 17, 2008, Hardy was involved in an incident at the Nashville International Airport's Southwest gate.A Southwest Airline employee reported that Hardy appeared to be intoxicated, and therefore, he was not allowed to board the flight. He was not, however, arrested as he was said to be "calm" and "co-operative", and he made other arrangements to get home.

On September 11, 2009, Hardy was arrested on charges of trafficking in controlled prescription pills and possession of anabolic steroids, after a search of his house yielded 262 Vicodin prescription pills, 180 Soma prescription pills, 555 milliliters of anabolic steroids, a residual amount of powder cocaine, and drug paraphernalia.[307] Over a year later, the district attorney announced that Hardy would plead guilty to the charges.[308] On September 8, 2011, Hardy was sentenced to ten days in jail, 30 months of probation, and a fine of $100,000.[309][310] Hardy served his jail sentence from October 3 to 13, 2011.

Focusing on the here and now, the ISFP personality type will live life to the full, cherishing the present moment, and finding real pleasure in the more sensory and practical activities such as painting or handicrafts. They need an inner balance, a kind of karma for their lives and this means keeping things as uncomplicated as possible. Planning and control are not for the ISFP, they much prefer to stay in the background doing the things they like, keeping a balance, which includes choosing to remain, happily disorganised. Quiet supporters, rarely will an ISFP be the leader, preferring to remain behind the scenes, observing, understanding, but saying very little.

The ISFP is the astute observer of life, quiet, introspective and kindly. Harmony and respectfulness of values are so important to them. And although trust takes quite some time to establish, once it has been, the ISFP will be a solid and dependable friend. Yes, it will take some time to really get to know the inner values of an ISFP, but the reward will be a friend for life, a friend who will proactively anticipate problems and quietly support others. Conversely if trust is broken, the ISFP will (again quietly) walk away, no fuss, apparently passive but stubbornly refusing to engage again. Gentle supporters, the ISFP will prefer to remain behind the scenes, rather than lead, observing, understanding, but saying very little. There is a stubborn side to the ISFP, but this is more of a passive stubbornness, meaning they may say 'yes,' but mean 'no.' Their gentleness and thoughtfulness means that the ISFP can be an excellent mediator in the team, seeking out the positive and building harmony.

Patient and very flexible ISFPs follow the path of least resistance, rarely criticising the beliefs, actions or attitudes of others. This also means that they will not always stand against change but will instead internalise events and then accommodate for these events rather than trying to control or resist them. The desire for harmony at all costs also means that the ISFP may not voice their concerns, preferring to bottle up their feelings possibly for longer than is good for them. Their view is that to be forthcoming is to put your head above the parapet and the ISFP will not do that readily.

Focusing on the here and now, the ISFP will live life to the full, privately enjoying the present moment, and finding real pleasure in the more sensory and practical activities such as painting or handicrafts. Unlike the INFP who will be intensely future focused, the ISFP wants to remain in the concrete reality present until their need for experience is satiated and they move onto the next, new sensory experience. They need an inner balance, a kind of karma for their lives and this means keeping things as uncomplicated as possible. This need for balance and harmony may mean, however that the ISFP puts off a decision until the decision is made for them. Being so present-oriented they may neglect to plan or even try to glimpse into even the near future preferring to take life as it comes along. Planning and control are not for the ISFP, they much prefer to stay in the background doing the things they like, keeping a balance which also includes choosing to remain happily disorganised.

Gentle supporters, the ISFP will prefer to remain behind the scenes, rather than lead, observing, understanding, but saying very little.

The downside of this is that the ISFP can be overly laid back and, unless it is important to their values, have 'one speed,' with little acceleration. The ISFP wants, and needs, a cooperative environment, where harmony is a first principle, and confrontation is kept to a minimum. Incredibly perceptive, ISFPs are ahead of the game and are usually the first to tune into the ‘new wave.’ Many ISFPs throw themselves into new fashions, ‘avant garde’ experiences, 'hip' trends, some even setting these trends. Their natural impulse hankers after freedom, and they often push off when others least expect it. The ISFP who continually represses these impulses will lack energy and may eventually push off anyway, towards anything provided it is different. Formal education is difficult for the majority of ISFPs, they prefer experiential learning, at which many excel. ISFPs will practice playing an instrument or honing a favoured skill such as painting for hours on end, not so much as practice as for the sheer joy of the experience.

Often confused with the INFP, ISFPs are less dreamers and less future oriented than INFPs, preferring to live out their sensory experiences and make them happen in real time, rather than enjoying imagining them in the future. They will internalise their feelings so much that they will be difficult to know, although sometimes these feelings will leak out at inappropriate times. The ISFP often project their reactions to their feelings, rather than the feeling itself.

The History of The WWE Hardcore Championship

Straight Outta Dudleyville: The Legacy of the Dudley Boyz

The Road is Jericho: Epic Stories and Rare Matches from Y2J

WWE - The True Story of WrestleMania

WWE: Top 50 Superstars of All Time

Breaking the Code: Behind the Walls of Chris Jericho

WWE: Satan's Prison - The Anthology of the Elimination Chamber

WWE: The History Of The World Heavyweight Championship

How does Jeff Hardy's personality compare to other Celebrities?